A lesser known independent nation of Southeast Asia and member of ASEAN is also one of the world's smallest countries with an area of 5,800 square kilometres (2,200 square miles). Brunei Darussalam, usually shortened to Brunei, comprises two small enclaves on the northern coast of the world's third largest island of Borneo which is located in the South China Sea, east of Malaysia and Singapore, and south of the SE Asian mainland and the Philippines.

Borneo has a total area of 290,000 square miles, comparable to the former French Indochina (Laos, Vietnam and Cambodia) combined and even bigger than Texas! Borneo is shared politically by three nations. Brunei occupies just 1% of Borneo; Malaysia's Sarawak and Sabu States comprise 26% and Indonesia's four Kalimantan Provinces make up the remaining 73% of the island. The Equator crosses Borneo near the mouth of the 1,100 km long Kapuas River in West Kalimantan, from where jungle tours and treks give access to the famous Dayak people and culture of Borneo.

Borneo is also where the majestic Mount Kinabalu in the Malaysian state of Sabah rises to 4,100 meters (13,500 feet) above sea level; it is highest climbable mountain in South East Asia, making Borneo also the world's third highest island.

For sea travellers between the island territories, there are air-conditioned ferries running between Brunei, Labuan and Kota Kinabalu.

Brunei lies 5° north of the Equator (as does Penang in Malaysia) and was once the centre of an empire which covered the whole of Borneo and part of the Philippines. It was later a British Protectorate before attaining full independence in 1984. Now a constitutional monarchy, the head of state and political leader is the Sultan of Brunei (one of the world's richest men) who also assumes the roles of Prime Minister, Finance and Defence Minister. Other cabinet ministers are also members of the Royal Family. 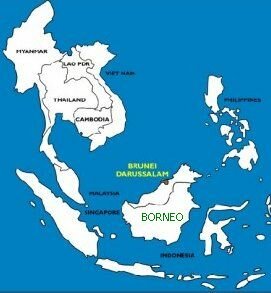 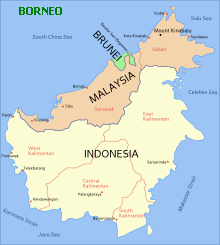 Brunei derives its national wealth from oil from which it has been able to develop and industrialise to some degree, becoming second only to Singapore in south-east Asia's development index. 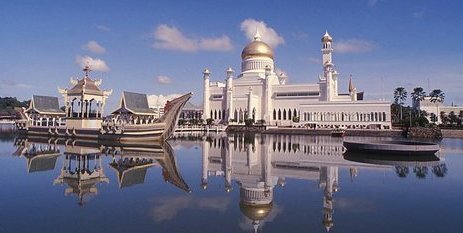 Living costs in Brunei are relatively low, despite its development levels, making it an attractive prospect for a vacation, expat residents who are mostly (if not all) employees; and retirees. There is no personal income tax in Brunei, so foreign pensions are tax-free too. The Brunei dollar BND is worth the same as the Singapore SGD and both currencies can be used in either country.

Retirement in Brunei may be difficult for a 'newcomer' as there might be no provision in Brunei immigration regulations for anything beyond a tourist or work visa and no incentive schemes aimed at attracting expat retirees to Brunei, such as in relatively nearby Malaysia. In order to move to Brunei, a foreigner would need to satisfy the authorities of enough money to live on, without needing to resort to Bruneian public funds.

Life for foreigners is generally laid back and easy going. Although it's officially Islamic, the Malay (67% of the population) and Chinese (15%) influence is noticeable, especially in the food. People like to relax and have fun, but without the public consumption of alcohol which cannot be purchased legally in Brunei; only two liters of spirits/wine and 12 cans of beer may be imported per border entry by adult non-Muslims for personal consumption in privacy. The local airline is 'dry' too.

Apart from the strict control of alcohol (a big issue for some expats), Brunei may be similar in some respects to Laos, a country that was virtually unknown to foreigners as little as 15 years ago, but now has big urban development, international flights, improved infrastructure, dual lane roads, big government office complexes and lots of new cars and SUVs. However, a major difference between Brunei and the Lao PDR is alcohol consumption! BeerLao is sold by can, bottle or crate in every small restaurant and shop in Laos.

Another difference is that Laos still relies largely on foreign aid in the hands of the big wigs in a (formerly communist but now market economy) one-party government, whereas petroleum and gas-rich Brunei's economy is tightly controlled by its immensely rich Royal Family who decide how far the benefits should extend beyond the family and cronies. In that respect the two countries don't seem that different for the underprivileged majority.

Rental rates for a three-bedroomed apartment average less than $1,000 per month away from the centre of the capital Bandar Seri Begawan (Bandar or BSB) where hotel and guest house accommodation of different standards is available. For example, the 5-star Jerudong Beach-located Empire Hotel and Country Club averages around $150 per night.

A three-course meal in a mid-range restaurant would set you back about $40.

According to HSBC an income of around $1200 a month would afford a comfortable lifestyle in Brunei, with money spare for travel and hobbies.

How to Get There

Visas are waived for visits of 14 days for nationals of Thailand, Indonesia, Philippines, Japan, France, Switzerland, Republic of Korea, Canada, The Netherlands, Luxembourg, Belgium, Liechtenstein, Sweden and Republic of Maldives.

Australian nationals are issued visas on arrival at Brunei International Airport for visits not exceeding 14 days. All other nationals entering Brunei Darussalam must have visas which are obtainable from any Brunei Darussalam diplomatic or consular office in the region.

As with several countries in the region with relatively low populations or subscribers, Brunei suffered from slow, expensive internet services on a poor network. While these are better, users in 2012 are still generally dissatisfied with both speed, highly dependent on location, and cost – compared to neighbouring Malaysia and Singapore.

Brunei is covered by a full landline telephone system, and has two mobile suppliers, B-Mobile, and DSTCom. BruNet offers ADSL eSpeed to TelBru customers, costing $65 per month for a 1 Mbps connection. Wireless broadband up to 5Mbps and time-based plans are available, cost around $100 per month.

As in most of Asia, Brunei mobile networks are GSM/UMTS using the 900, 1800/2100 MHz frequency bands. This means that a US dual band (850/1900) phone will not work in most other countries (especially if it is locked to a US network) except via expensive 'roaming'. However, an unlocked quad band phone will work anywhere in the world, and can be used with a local operator SIM card. Consider buying a new phone before you leave home or while you're in Asia where it might also be cheaper.

Healthcare in Brunei is free at the point of delivery for all citizens and permanent residents. Facilities are generally clean, modern and efficient, with four public hospitals in the country. There are also plenty of private facilities, if you find you don't qualify for free care or have a health plan. Brunei's government in general has a strong commitment to improving the health and welfare of its residents, so you should be confident of receiving good care.

Bruneians love to shop, and there are plenty of opportunities to do so in the country. You'll find both glitzy malls stacked high with designer goods, and market stalls. Most Bruneians have a reasonable disposable income, so they're able to take full advantage of the shopping opportunities on their doorstep. The main shopping district is Gadong. It has both a large and busy mall, and a lively night market. The Brunei dollar is on a par with the Singapore dollar and either currency can be used in both countries.

The local diet is similar to that of Malaysia and other parts of SE Asia where there is a majority of Muslims (Halaal-prepared and no pork). Rice and noodles are staples, served with meat or vegetable curries or stir fries. Whole fish or roast chicken, and various fried and grilled side dishes and snacks are common. Hawker stalls (such as those at the Gadong night market) are a good place to sample inexpensive local food. More upmarket restaurants serve pan-Asian and western dishes as well as local specialities. You can find just about anything you want to eat in Brunei.

When it comes to cooking at home, you can find local produce in grocery stores and market stores easily, and for a fairly low cost. If you want the comforts of home, expect to pay for them: imported foods are much more expensive than you'd pay for them back home.

Brunei is divided into four districts, all of which have a slice of South China Sea coast. Each has different qualities.

Belait is the largest of the four districts, and the furthest west. It is popular with westerners, many of whom work in the oil and gas industries which operate in the area. The population is around 60,000.

Tutong – a smaller district with a population of around 40,000. Many of its residents are members of local ethnic tribes.

Brunei Muara is the smallest district by area, but by far the largest by population, with around 250,000. Contains the capital city and is generally the most comfortable area for expats to live in.

Temburong is separated from the other three districts by a slice of Malaysia; it has a population of just 10,000 and is mostly rainforest and rivers. It is the home of the Temburong National Park, a must on the list for visitors to Brunei, with trekking and riverboat excursions to see the plant and wildlife and spectacular vistas such as this.