An Introduction to Cambodia

The Kingdom of Cambodia, formerly part of French Indochina (together with Laos and Vietnam), is one of the smaller countries in South East Asia. It is a largely inland state of around 70,000 square miles surrounded by Thailand to the northwest, Laos to the north and Vietnam to the east and southeast, and has a 450 kilometre coastline on the Gulf of Thailand to the southwest.

The Mekong River flows through Cambodia from Laos to its delta in Vietnam. Cambodia's population of just under 15 million gives it 69th place worldwide in terms of population, and the vast majority of those 15 millions (around 95%) practice a form of Buddhism known as Theravada. 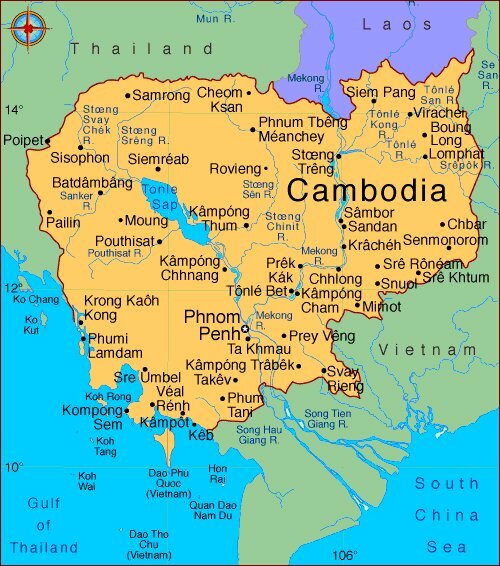 The major ethnic groups besides native Khmer peoples and the numerous ‘hill tribes’ of the mountainous regions are the Vietnamese, Chinese and Chams (a primarily Muslim ethnic grouping most common in Vietnam and Cambodia).

The capital of Cambodia is Phnom Penh, which is also the largest, most thriving city and economic centre. The country is rated as having a middle to lower income overall, with over 60% of the population still working in the agricultural sector and quite widespread poverty. The native language is Khmer, with French and English occasionally found also.

After a lengthy period of internal trouble and the terrible devastation suffered at the hand of the Khmer Rouge party, which ruled the country from 1975 - 1979 and killed almost one third of the population, as well as wars with America and Vietnam, Cambodia emerged in the 90s as a kingdom (like Thailand) with a multi-party democracy; it has become one of the most successful economies of the region, with an annual growth around 6.0% for the past 10 years.

Cambodia’s location in the centre of the Southeast Asian group of nations, bordered by Thailand, Vietnam and Laos and with a 450 kilometre coastline, presents both advantages and disadvantages for those seeking to get into the country. Road links exist between Cambodia and her neighbours, however it can be difficult (especially from Laos) to make the journey by bus or by car. Many roads are of poor quality and heavily affected by the seasonal storms and flooding suffered by the area as a whole.

Poi Pet is a popular border crossing between Thailand and Cambodia, especially for travellers from Bangkok on their way to Siem Reap and Cambodia's best-known tourist attraction, Angkor Wat. 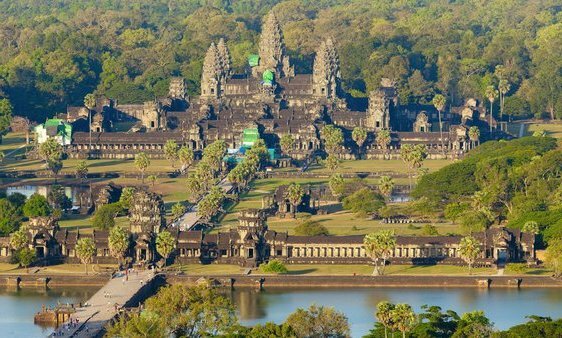 However, be aware of the visa and other scams operating at Poipet.

Depending on your intended arrival point, you can save yourself time, trouble and money by obtaining an eVisa for Cambodia from the government website. Note that the eVisa is valid for entry only at Phnom Penh and Siem Reap airports and road crossings at Poi Pet (Banteay Meanchey), Cham Yeam (Koh Kong) and Bavet (Svay Rieng).

Crossings from Thailand cannot be made by bus, though the bus can take you to the border on both side it cannot cross it, though from this country there are 5 crossing points.

From Vietnam, buses can cross the border though you will be asked to leave the bus at the border crossing and be asked to present a passport photograph for a visa, and the road can be poor quality on both sides of the border. Boat services can be used to cross from Laos and Vietnam.

Travelling by plane is the easiest method of getting into the country. Cambodia has two large airports at Phnom Penh and Siem Reap, which is the airport of choice for the hugely popular Angkor temple ruins and is a popular tourist destination in the country.

Once in Siem Reap, near Angkor Wat, you can use tuk tuks to get around for around $10-$20 a day. Buy your ticket only at the park entrance. Don't let anyone sell you a ticket outside the box office. In 3 days you can see must of the site. Bring your own food and water as prices inside are exorbitant. The most insistent sales people in the world are here. Be patient and just say NO. Take with you a book/guide so you can understand what Angkor is all about.

Getting a visa to enter Cambodia will cost between $20 and $25 dollars and is not difficult. The standard tourist visa lasts 90 days. Visitors obtaining a visa at the border should be wary of scams and have adequately researched border procedure so as not to be ripped off.

Travel insurance is a must for a journey into Cambodia. Crime is not a serious issue in Cambodia, though it can happen to anyone and preparation is vital. Domestic aviation is improving in Cambodia, and it is now possible to travel around - to some extent - by plane on one of the cheap local carriers. Though the only two airports you can use are Phnom Penh and Siam Reap these two cities are large and offer easy access to much of the country. Apply Online for a Cambodia visa for tourism or business | The Easiest way to get It.

The greatest ease of access to the Cambodian interior can be provided by helicopter, which allows you to travel virtually anywhere in the country one way or return. However, this costs up to $1700 an hour plus tax so is very costly. Boats can get you up river to many locations, and cheap taxis and internal bus services - relatively safe and very cheap - are available almost everywhere. Taxi drivers in the cities will rarely charge you more than $1 per ride.

There are also train services and ramshackle ‘bamboo trains’ - makeshift vehicles carrying all manner of things - in the cities and countryside. Accommodation For those willing to sleep in the more basic sort of guesthouse (provide your own sheets, towels etc) you can pay as little as $2 a night. However, if you’re looking for a more sanitary and / or well provided nights sleep in a branded, chain - style hotel, paying anything up to $100 and more in the cities is likely. It’s mostly down to personal taste.

Cambodia remains one of the poorest countries in the world, despite its well performing economy, and its people will gladly accept your cash to pay for things at a fraction of what you’d pay elsewhere. It is possible to live for only a handful of dollars a day, if you are willing to go relatively cheap. Dollars which are available from ATMs are accepted almost universally in Cambodia alongside the national currency, the Riel, ~4000 riel (KHR) equals 1 US dollar. 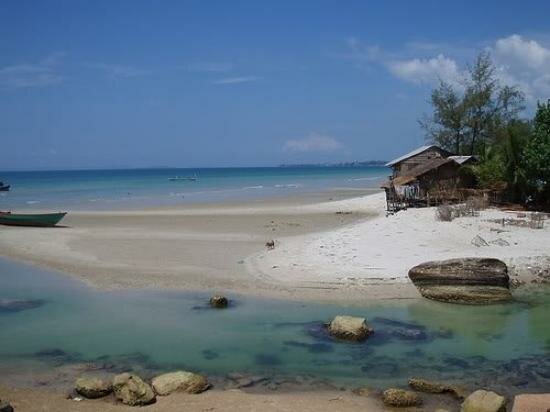 Cambodia is a beautiful country, packed full of things to see and do. The beaches of Sihanoukville like the above at Bamboo Island rank amongst the most spectacular in the region and are well worth a visit if you want a relaxing break from the hustle and bustle of cities such as Phnom Penh and Siem Riep, the latter becoming increasingly recognized as a tourist destination for its culture and great markets.

The Koh Kong mountains offer a spectacular ‘Conservation Corridor’ where one can see all manner of wildlife in the jungles, mangroves and waterfalls of one of Cambodia’s truly unspoiled corners. For the strong footed, a long, hellish overland walk across the mountains brings you to Prasat Preah Vihear, a spectacular mountain temple. And, of course, there is Angkor Wat, the so called ‘Mother of all Temples’ - for which there is little description other than that it is truly breathtaking. This is the new online authorized service for obtain the official Cambodia visa safer and easier. One can only say that, in a country as rich and fascinating as Cambodia, the question is not what to do - but what to do next.

Cambodia is an intriguing country, and one that holds many stories and secrets. Some of the chapters of its long history are dark and disturbing, and speak of the most terrible orders of trauma and tragedy of our time. But the country is on the up and up, mending itself to show to the world that it is truly a land of infinite beauty and possibility, and that beneath all of its mysteriousness lies a land just waiting to be experienced by all of those who dream to feel the fresh air of an exotic Southeast Asian country and people. Cambodia is now a popular and ideal destination for a vacation.