An Introduction to Indonesia & Bali

Bali (introduction to Bali) is one of Indonesia's seventeen thousand islands and also a province. It is a very well-known holiday destination for visitors from both the West and the East. The island lies about 8 degrees south of the Equator, southeast of Singapore (a little over two hours flight time). While Bali is accessible by a short ferry crossing from Java, with Indonesia's capital Jakarta and cities like Bandung, Semarang, Yogyakarta and Surabaya, most visitors fly to the Bali capital Denpasar, near the southern tip of the island. The distance by air from Jakarta to Bali is about 1,000 km (600 miles). Overland, it's considerably more.

Most visitors to Indonesia (including the Province of Bali) need a visa, available in many cases on arrival, or from an Indonesian Embassy abroad. Visa-free entry is granted to some (but not all) ASEAN nationals (Indonesia is an ASEAN Member) and passports of some other countries. See our Visa Page for more information on visa requirements for Bali, Indonesia and other Asian countries.

Bali is a favourite vacation destination for tourists of many nationalities, especially Australians, including divers, surfers and others, both young and old, as other Western and Asian visitors. There is a sizeable ex-pat community too, some with their own businesses (usually joint ventures with an Indonesian partner), sporting and accommodation facilities to serve the many tourist activities. There are other nationals who have made permanent or temporary homes on the island including British, American, Germans, Dutch and Italians.

Apart from the busy capital Denpasar and nearby Kuta, Legian and Sanur beaches, there are large hotels and resorts at Nusa Dua Peninsula and Uluwatu near the southernmost tip of the island, beyond Bali's Denpasar (Ngurah Rai) Airport.

Inland are several fair-sized towns including the famously unique 'arty-crafty' Ubud and its surrounding villages and resorts like Payangan; there are also Tabanan and Gianyar. Driving north past the rice fields and terraces to dormant volcanoes and picturesque lakes, you reach the less-populated north coast and Singaraja, with nice beachside hotels and resorts at Lovina and Anturan. While the road west offers few tourist attractions and scenery, it passes through Negara  and leads to the port of Gilimanuk and the ferries to East Java – about 3km distant. Cutting across country, the road picks up the north coast road and leads to Singaraja.

You can continue along the coast to the eastern side of the island where there are quieter beachside resorts and diving spots near Amplapura (also seen as Amlapura) and Candidasa (pronounced CHAN-didasa) and to the south, the peaceful fishing village, port and beach at Padangbai (see picture) where there are ferries to Lombok and other Indonesian islands east of Bali.

Religion and Culture
One of the chief attractions of Bali is of course Balinese culture and Hindu religious ceremonies and rituals which form an integral part of the daily lives of most Bali natives. This is even more apparent in the outlying villages and smaller towns than in Denpasar itself, which as the main commercial centre, is inhabited by several different ethnic groups, including Muslim Indonesians from Java and other islands, Chinese and other nationalities. Culturally, Bali differs from most of the rest of Indonesia which is the largest Muslim-populated country on earth. Bali is an island province, so has its own local authorities, but the economy is controlled to a great degree by the Islamic majority government based in Jakarta, on the much larger island of Java, immediately to the west of Bali. A short ferry crossing links the two.

Bali ceremonies (including cremations) are a famous tourist attraction on their own, and many spectacular performances of dancing and local culture demonstrations are put on specially for the visitors. However, as a resident who has 'seen it all before' they can intrude into normal daily life; even be an annoyance, especially for those not really interested in religion or 'pagan rituals' like these offerings to the gods. 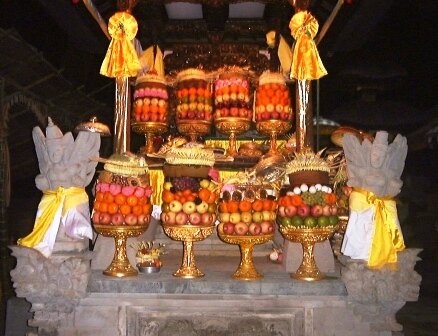 Art Galleries and Artists
Not all ex-pats come to Bali to find their 'inner spiritual selves', most preferring the beaches, water sports and nightlife. However, there are many that do and there is a smaller community some distance inland in the mountains that will suit these people better. It is called Ubud, a refuge for both foreign and local artists and art students, and where there are many art galleries with paintings and shops selling handicraft and handmade furniture to tourists who flock there daily. The areas of Ubud and Payangan are also known for their luxurious and extremely expensive villas and spa resorts, with beautiful panoramic views over rice fields and over steep ravines, with even a Mt Fuji-type dormant volcano on the horizon.

Accommodation and Infrastructure
Although hotels, guest houses and residential accommodation, restaurants and facilities for foreigners are generally of a high standard, many exceeding those of other popular ex-pat locations, technological advances have been slow in reaching the island. Bali is near 'the end of the line' of Indonesian telecommunications (still government-controlled), including land and mobile telephones, fax and internet. Fast, reliable connections are not guaranteed even in the most populous areas. Indonesia still suffers from the corruption - past and unfortunately, present. Much of it is still in evidence, but accepted by those who live there. Tourists are not really affected. 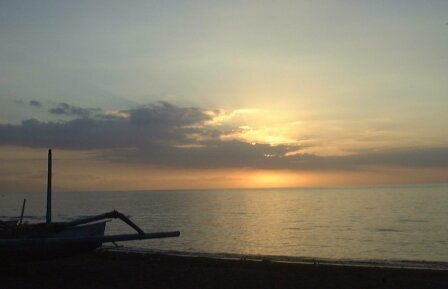 While Bali appears to be idyllic in many respects, and visitors are invariably impressed when seeing it for the first time. But daily life for a long term foreign resident can have its drawbacks, poor infrastructure and utilities like phone and internet connections being among them.

Learning the Language
Although English is spoken in tourist areas, Bahasa Indonesia is the main language and understood by most Balinese. Bali also has its own language which is quite difficult to learn. However Bahasa Indonesia will work very well in most situations. An English to-local-language dictionary is essential. Many people find Talking Dictionaries to be invaluable while travelling around Asia! They are available for many languages and not only from English into Asian.

There's also a Flash Card program you can download to your Nokia mobile phone. This is an easy and fun way to learn Indonesian general vocabulary, business, legal, medical and computer terms. It runs on most phones using the Symbian operating system.

Government and Religion
It was thought (hoped) that the government of Indonesia under President Susilo Bambang Yudhoyono, known by all as 'SBY' would bring in positive change on all fronts. Sadly this does not look promising. From 2006 to 2010, proposals continue in Jakarta to impose Sharia Law in Indonesia despite warnings that adopting it would adversely affect Indonesia's relations with other states. Indonesia has the world's largest Muslim population. Sharia law has already been partially implemented by the self-governing region of Aceh. Bali is unlikely to escape in spite of its high Hindu religious majority or the billions of tourist dollars generated there. Anti-pornography and promiscuity measures are likely to be imposed, highlighted by several recent cases which have received world publicity.

Bali is excellent for a holiday, vacation or honeymoon

If you are planning a holiday in Bali, I can recommend my former personal assistant and friend and now excellent Balinese driver and tour guide (many are from Java and other islands).

Ariawan has blogs at UbudDriver.com and Bali-Driver.blogspot.com where you can get details of his tours including a day trip to the Kintamani Volcano. See many photos and comments from Ari's numerous satisfied passengers who have also become his friends or send him an email: .

Check out some great accommodation deals in Bali!

Read our next page about the contrasts to be found in Bali that makes it such a unique place to visit.

Other visa information for visitors to Indonesia and other parts of Asia can be found on our Visa Page.