As can be seen on the map of Laos below, the country with an area of 236,800 sq km (91,400 sq miles) is landlocked, surrounded by China, Vietnam, Cambodia, Thailand and Burma (Myanmar). The mighty Mekong River is the main waterway for the country. The Lao population in 2006 was around 6.4 million people from 47 different ethnic groups. It has been increasing at 2.4% annually to an estimated 7 million by 2015. Over eighty percent of the population of Laos inhabit the rural and mountainous areas and rely on subsistence farming. Development in 15 of the 19 provinces has been hampered partly by the dumping of 600,000 bombs by US forces during the Vietnam War. Click below to see more Lao maps with greater detail.

Areas of interest to foreign residents are likely to be either the current capital Vientiane (estimated population 320,000) or the tiny capital of the former Lao Kingdom, now a UNESCO World Heritage Site, Luang Prabang (pop. 25,000). Vang Vieng is a small but growing tourist location, popular with foreign students and backpackers who fill its many cheap restaurants, internet cafes and shops and more than a hundred guesthouses. River tube-rafting 'pub-crawling' and swimming are popular daytime activities. Vang Vieng is a three-hour bus ride from Vientiane on a scenic drive north towards Luang Prabang and beyond to Vietnam and China. The road south from the capital follows the Mekong River to Savannakhet and Pakse with several crossing points into Thailand, Vietnam and Cambodia.

The countryside is Lao's most attractive feature, and seeing the simple existence of the local inhabitants of the rural areas – mostly subsistence rice farmers. The country is primarily unspoilt and although road and river trips may be long and rather slow, the scenery makes it all worthwhile. Life for the residents of Vientiane is very different from that of the rural folk, especially those in the poorer areas of the North, because as the capital and seat of government, it contains a relatively small but visible class of prosperous urban elite, drawn from French colonial and royalist government days, government personnel as well as foreigners from the various international joint venture and aid projects now in progress.

Land-locked Laos, listed as one of the world's poorest countries, has been dependent on foreign assistance for its economic survival since 1975, the year it became a socialist republic, modelled along the lines of its neighbour and ally Vietnam. The Lao Foreign Minister declared on Radio Vientiane that the Lao PDR received an estimated $3.465 billion in foreign aid from the former Soviet Union and other donors between 1975 to 1990, and nearly $3 billion from foreign donors between 1991 and 2005. Since the demise of the USSR, Laos has turned increasingly to Western donors such as the World Bank, International Monetary Fund, Asian Development Bank, United Nations and Western democracies in the aftermath the collapse of the Soviet Union in the late 1980s. Within Asia, China and Vietnam as well as Japan, Korea, Singapore and Thailand all play important roles. 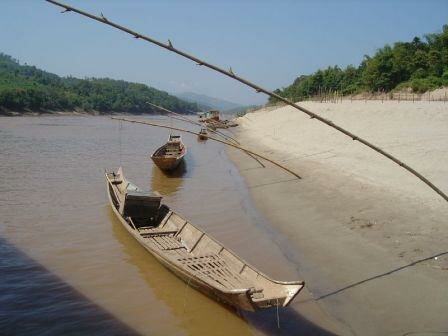 A dry-season 'beach' on the Mekong River

It is estimated that foreign aid accounts for 70 - 80 percent of the Lao annual budget.

Private enterprise is increasing significantly as a more Thai/Western-style consumer-oriented 'middle-class' evolves, such as has already taken place 'across the river'. New businesses are springing up around the main urban areas and roads systems are improving (with foreign assistance). The economy appears to be thriving, when observed from cities. In October 2010, the Lao Securities Exchange Commission opened its new building which is located almost opposite the Lao ITECC Centre. The Laos Stock Exchange is a joint venture between Laos (51%) and South Korea (49%) began trading in 2011. First impressions are often the most lasting
A 30 day visa on arrival for the Lao PDR is now available at any border crossing or river port-of-entry for between US$30 and $45 depending on nationality. While it may seem a little rash to visit a new country for the first time and then just decide to stay, some want to do just that!  They enjoy themselves so much, they are reluctant to leave. Lao has that effect on some people!

Compared to many countries in Asia and beyond, the cost of living is very low. You can choose a style of living to suit any budget. If you're concerned only with the basics you could rent a room (even a whole house – with some plumbing improvements), buying your food already cooked in the many shops and restaurants, or fresh from local markets, surviving on a few hundred dollars a month if you needed to. Many Lao people live on far less than that – and party with their friends often! At the other end of the scale are modern Western-style houses for $500 upwards per month, and serviced apartments in the city. Even this type of accommodation is a fraction of the price of the equivalent in many other Asian countries.

As far as staying in the Lao PDR is concerned, one should definitely pay a holiday visit first before deciding on a permanent move. You can check prices and make bookings for recommended hotels in Vientiane and Luang Prabang, some of which will offer rates for long term residence too. But it's wise to spend a few nights before committing yourself! Booking online gets you much better rates than walking in to the lobby.

Road or River Entry into Lao is possible at several crossings on the Mekong River, from Thailand or Vietnam, but the most popular by far is at Nongkhai in Thailand, accessible by sleeper train from Bangkok or by bus. Thai Airways and discount carriers fly from Bangkok and Chiangmai, and now Singapore, to Udonthani. From there it's a 40 minute airport bus ride to Nongkhai on the Mekong River which forms the border between Thailand and Laos. A shuttle bus service operates across the river using the Friendship Bridge. Then it's 25km to the centre of Vientiane by tuk tuk, taxi or bus.

In December 2006 a second Thai-Lao Friendship Bridge opened in the south of the country linking Savannakhet with Mukdahan in Thailand. The East-West Corridor route originates in central Vietnam's shipping port of Da Nang and runs north along Vietnam's National Highway 1 to Dong Ha, linking Vietnam and the Lao PDR via National Highway 9. The new 1.6 km bridge connects Vietnam and Thailand via Laos, giving Lao access to ports in both countries. Cars travelling across the bridge are charged 50 baht and trucks 350 baht.

International flights to Lao operate from Thailand, Vietnam, China (Kunming) and Taiwan; from Chiangmai via Luang Prabang or Bangkok to Vientiane direct, which is quickest and easiest, but more expensive. Many airlines fly into Bangkok of course, so Lao is relatively accessible nowadays.

See our Lao travel and banking pages for further detail, and other pages on the menu bar.

Visitors are now welcomed in Lao
As a tourist or more permanent resident, there's no need to be unduly concerned about the police or personal safety, provided you are not involved with political dissent, religion or drugs. Visiting places and following the usual pursuits, neither tourists nor residents will attract undue interest from the local authorities. Embassy and travel warnings of terrorist insurgents on some roads are not only exaggerated but often out of date.

The Lao police can be considered as low-paid government employees rather than civil servants. They rarely solve problems or offer assistance in emergencies. In the cities especially, they supplement their income by 'spot' fining drivers for misdemeanours. You might be stopped and asked to show your papers because they will say these are not in order or insist you have done something wrong, such as making an 'illegal' free right turn or run a red light; locals do it all the time of course. They are just ‘hungry’ and want you to pay for their next meal. You smile, offer them up to five dollars, even if they ask for more, and can usually be on your way.

The alternative is confiscation of your licence which will need to be retrieved it from the police station on payment of a heavier fine. This will be more time-consuming and frustrating than smiling and offering to pay on the spot. It's just one of the irritations of many Asian countries including Thailand, Indonesia (especially Bali), and the Philippines. 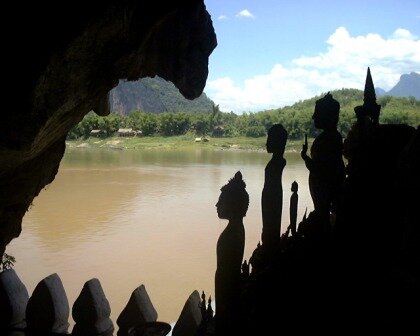 Buddha Caves on the Mekong River near Luang Prabang

Everyone who visits Laos finds it both intriguing and enjoyable
Travellers in Asia have always found Lao a fascinating place to visit, with attractive, friendly and hospitable people and a wide range of accommodation for all pockets. Visit a popular Laos travel forum to confirm this. In spite of losing some of its backwater charms, Laos has not changed too much for the worse, and is still a long way behind Thailand in terms of infrastructure and public services. Although things move slowly in general, technology has advanced quickly, with ubiquitous mobile phones and internet cafes in most centres including some WiFi hotspots in main towns. ADSL and wireless broadband are available in Vientiane.

There are Western-style super and mini markets, with fresh bread, milk and imported toiletries and other items, of interest to tourists and residents alike. All in all, Vientiane is still a unique jewel in Asia. Anything unavailable locally can easily be bought in Nongkhai which has a full range of shops including a large well-stocked Tesco (Lotus), and just a short trip across the Friendship Bridge. This is an easy way to get a new tourist visa too. For long term stay, $30 or more every month, although not excessive, will fill up your passport pages pretty quickly. There are better options including a one-year business visa. You will learn more after settling in about Lao government bureaucracy, and ways around it! Our Lao Travel page has more information on visas and transport. BTOS is jointly managed by EDF-Lao and EDF-Thailand, a decades-old registered NGO that has distributed educational support to over 300,000 needy children. You can help too.

Banking in Vientiane and Laos

Best places to see and stay in Vientiane (traveller reviews).

Vientiane by Night and Making Friends in Lao