Possibly the most welcoming of all the tropical Asian countries both for holiday vacation and retiree living, is the Philippines. While Malaysia may have better infrastructure and even a special retirement scheme for single foreigners or expat couples, there's little doubt that the Philippines has much more to offer in the way of a holiday lifestyle and entertainment, especially for the single male! However it's quite often that a Filipina (lady from the Philippines) has already captured his heart and he settles there permanently and starts a family. There's something for everyone, and for many Westerners the Philippines is a Dream Come True! 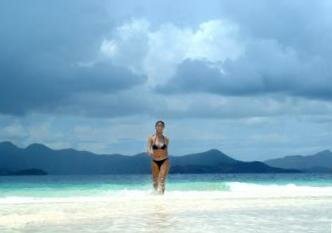 Due to the Philippines' colonial past including 400 years under Spanish control administered from Mexico, when the Catholic religion was introduced and remains prominent to this day. The Americans took over in the early 1900's. It was jokingly summed up as 400 years of living in a Convent, followed by 40 years of Hollywood! Both Western and Latin influences are very noticeable. The people are warm, friendly, very family-oriented and sincerely helpful by nature; most speak some English, as it is a compulsory school subject.

Possibly one of the most photogenic places on earth, the Philippines provides magnificent scenery such as seen here. Search below for a huge range of artwork you can hang on your own walls:

Although the use of the Spanish language was never actively encouraged, there are many Spanish words in Tagalog which is widely spoken among the locals. The Philippines is basically an English-speaking country, and life in the Philippines has similarities to that of living in the USA, Canada, or Europe, but at a much lower cost of living. The government encourages foreign residency by offering a special visa for those that would like to stay in the Philippines. Visit our Philippines Retirement page, or first get an idea of vacation rental accommodation by clicking on a property on the right. Of course, once you've found where you'd like to stay, a long term lease is going to work out cheaper.

There's a wonderful 'ethnic mix' reflected in the diverse features of Filipina – women of the Philippines – as you can see here:

The first inhabitants of the archipelago that became known as the Philippines were mainly of Malay origin. Over the centuries, Middle Eastern, Indian and Chinese traders visited the islands, all leaving the mark of their own Asian cultures as well as those of  Spain and South America, including the Portuguese-speaking countries. So this has influenced music, clothing and fashion, and most of all, the food. Philippines cuisine is a fusion of taste experiences. Apart from Malay and Chinese dishes, paella, apretida, aroscaldo, menudo and calderita are all considered to be Filipino dishes. The Americans brought Coke and fast food, so pizza, fried chicken and burgers are found in all the busy tourist areas.

Visiting the Philippines is easy for most travelers. Tourists and business visitors to the Philippines staying for 21 days or less do not require a visa. See whether you need a Philippines Visa. Check out vacation accommodation in the Philippines. Your first stop will be Manila the capital on Luzon Island, also the location of Angeles City.

By the way, if you're looking for a hotel near Manila Airport, DO NOT choose the RAF Mansion. Despite its rather grand name it has consistently terrible guest reviews from unsuspecting travelers. While I wrote this several years ago, by 2017 the bad reviews were still coming in! Read them and then pick one of the many alternatives.

The Philippines has of course long been a premier tourist destination, with many different activities and types of entertainment on offer. Apart from the capital Manila, Angeles City is a favourite with tourists, foreign retirees and residents alike. Most people will take a holiday first to find out more about where they might want to retire. Davao City, Boracay Island, Cebu City, Puerto Galera and Palawan are all popular locations among the Philippines' 7,000 islands. There are plenty more.

Find out all you need to know about getting there, the best Philippines hotel deals, car rental and things you can see and do on a Philippines vacation.

Timeshare in the Philippines
The best way to decide if the Philippines is ideal for your retirement is to vacation there. But to get a sense of what it would actually be like to live there, you'll probably want to avoid impersonal accommodations and elect to stay in timeshare rentals instead. With timeshares you can immerse yourself in the culture of the Philippines and imagine what your daily life would be like. You'll also enjoy amenities you've come to expect (and some you wouldn't), because Philippines timeshare includes extra living space, fully-functional kitchens, and furnishings with a local flare.

Tagalog is the Philippines local language, and while all filipinos are taught English at school, learning the basics helps a lot in understanding the people and will be an asset in many aspects of living, socialising (especially with the ladies!) as well as doing business with the locals. Many books and dictionaries are available to learn Tagalog

To successfully move to the Philippines, it is important to be armed with the right information. While you can see our Before You Move page for general information, we recommend you learn from an author who has put together some indispensable guides for loving (!!) living or working, investing or just retiring in the Philippines.

All the influences mentioned above have made the Filipina a unique 'hybrid' of beauty, caring nature and a traditionally family oriented person – the ideal marriage partner it would seem! And for many, she is just that.

There's no avoiding the topic of relationships between European men and Asian women. Many Western men, especially those with failed marriages and relationships in their own countries, are drawn to making a new life in the tropics, countries like Thailand and the Philippines among their favourite destinations. And with good reason. Apart from the different culture and more exotic lifestyle of tropical Southeast Asia, with warm seas, sandy beaches, island paradise getaways, mountains, lakes, food, traditions and culture, there are THE WOMEN! And that's hardly surprising. The beauty and 'caring friendliness' of Asian women is legendary, which is why the Philippines is deservedly a favourite place for Western men to holiday, work, retire, and of course marry. The local word for a spouse (wife or husband) is Asawa.

Before you even visit the Philippines visit a free dating site for Philippines women, known as Filipina.

Taking things a step further, it is easy to get yourself into 'hot water' and probably lose a lot of money if you go blindly into a relationship (we're not talking about casual liaisons here) with an Asian (Thai or Filipina) woman. Most choose by default to learn the hard way by making their own mistakes. This is human nature. Smarter guys learn from others' experiences and problems first, then tread carefully. Which are you going to be?

Visit our next page for more information and insight into relationships in the Western male, Philippines female context, including two excellent manuals on how best to handle these important issues. Here is retirement information.

Book titles (pdf file ebooks) by Perry Gamsby, author of 'Making a Living in the Philippines', the 'Philippines Survival Guide' ...

by Perry Gamsby are now available from Amazon in printed and also Kindle editions.: