Chiangmai is located in the northern region of Thailand where most of the population follows the Buddhist philosophy, but blends it with animist rituals and beliefs. It is a fast developing country with strong capitalist ideals. Bangkok’s thriving vibrant metropolis lies some 600 km to the south and is the seat of government. The people of the northern provinces of Chiangmai and Chiangrai which form the mountainous region which borders Burma (Myanmar), are different in nature to those of the central and southern regions of Thailand. Many hill-tribe people from both sides of the border have settled in the area, and trade their artefacts and products in the city. There is the famous Night Bazaar in Chiangmai, with hundreds of stalls displaying products of all descriptions, mainly to the tourists.

A very popular activity for visitors to Chiangmai is to take a quick day or evening course in Thai cooking, as Thai food is now so popular all over the world. One happy student wrote on March 12, 2011:

"I've attended the full day course instructed by Ae. Since I took a few other cooking courses in the past at different schools in Chiang Mai, I can compare. I must say I enjoyed this school the most. I love the location of it, no need to travel outside the city. It is within the old town walls." 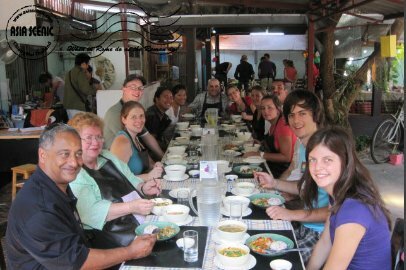 "Dan and I have enjoyed the food in Thailand so much we signed up to take an evening cooking class at Asia Scenic. We were concerned about learning about the ingredients and techniques to make tasty Thai food. We learned 10 dishes between us and they were easy and very delicious. Ann was our teacher and she gave great instruction."

Compared to Bangkok, Chiangmai is a small provincial town. Not everyone wants big city hustle and bustle, which is the reason many foreigners choose Chiangmai as their refuge. Chiangmai is within an hour's flight of Bangkok anyway. It is a tourist hub for the whole of Northern Thailand. There is also some industry, and it is the base for a number of Christian missionaries, who attempt to 'educate' the hill tribes of the north. There are also many commercial schools employing foreigners to teach English to Thai students, due the poor quality of teaching in the government schools. Chiangmai University also employs foreign teachers with suitable qualifications. See our Teaching pages for more.

A few thousand ex-pats live and work in and around Chiangmai, enjoying a relatively laid-back lifestyle, with a great variety of food and entertainment. Chiangmai is fortunate in having one of the best sandwich shops in SE Asia. 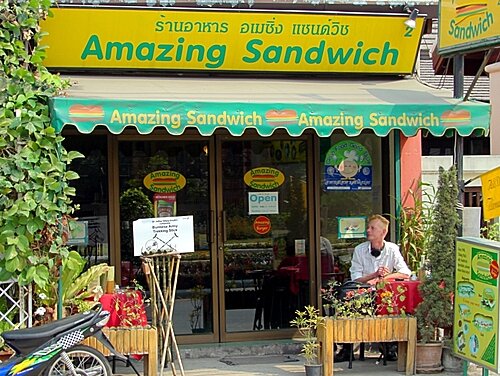 Try an Amazing Sandwich, burger and other Western breakfasts and treats. The restaurant is located just across the road from the Central Shopping Complex and Chiangmai Orchid Hotel near the NW corner of the Old City and Moat. Chiangmai is well known as a pleasant place to retire, and has many good features in the form of shopping malls, international standard hospitals, international schools, golf courses and more. Air pollution and flooding in certain areas in the rainy season are two of its drawbacks, but these problems are slowly being addressed. Compared to Bangkok, Chiangmai is very 'provincial'. Many foreigners prefer it to living in the rat race of the capital.

Medical care away from home
While large cities in several SE Asian countries have excellent private hospitals, and operations and treatment are considerably cheaper than the USA or Europe especially. However this can still incur heavy expense. Your home country medical plan will not cover you for extended periods abroad. Foreigners residents of any country should consider a medical insurance plan from a reliable international insurer.

The local ethnic people are not particularly business-minded by nature and the majority of business was left to the Thai Chinese community established several generations back. However, economic necessity has opened up new opportunities and all ethnic groups are involved in agricultural-based and manufacturing industries. A serene scene at the moat around Chiangmai's Old City.   © SiamShot

Communications including internet access, are improving at a rapid pace, as they are in all the main centres of Thailand. This is not surprising, considering the telecommunications empire formerly owned by the family of the recently deposed government and its corrupt prime minister and cronies.

Find the best deal, compare prices and read what other
travelers have to say about Chiang Mai