'Remittance Men': the original and the new breed of remittance men and women – and 'fitting in' with your fellows

Expatriates and foreign residents are found everywhere in the world nowadays, some in the most unlikely of places. They leave their own countries for many reasons, but financial issues and money transfer are an integral part of living overseas.

Most people who travel or live abroad or support others there, tend to rely on 'high street' banks to transfer money between countries, but banks are notoriously expensive in terms of exchange rates, commissions and other charges. Alternatives like Western Union and MoneyGram are convenient, but their fees are typically higher than the banks. Long-time foreign residents looking for the cheapest ways to send money use reliable organisations such as CurrencyOnline to provide instant quotes and online transfer at better rates than the banks, and no extra fees. It's worth looking into what they offer if you need to send money overseas by trying the free currency converter on the right.

History of the Remittance Man 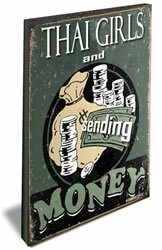 Remittance men originally came from England, but not any more. Far from it; more are from still-developing countries in Asia and also economic refugees from Eastern Europe. People have many different reasons for living and working away from their home countries, but today it's often economic; there's no work or it's not well-enough paid in their own country.

The term dates from the 1880's. 'Remittance Man' was a rather derogatory name given to young Englishmen sent off by their families to live in one of the former British colonies and protectorates such as Rhodesia, Kenya, India, Ceylon, Malaya, Burma, Hong Kong, Australia, New Zealand, Canada and also the USA.

Remittance Men were usually the second or younger sons of aristocratic and wealthy British families whose assets were traditionally passed down to the first son, leaving the other children with little or nothing, and therefore few prospects of their own. They often led aimless lives, many of them not knowing what they could do to earn a living.

While they may or may not have included Robert Service, mentioned below with his famous poems about 'men who don't fit in', some of these 'gentlemen' became embarrassments to their families due to drinking, gambling and partying and generally depleting the family's resources while they were still alive. Under the circumstances who could blame them? Payment just for staying away from home! Whatever the reason, a convenient solution was to ship them off somewhere, where they could be sent funds called remittances (money transfers), and they were left to make whatever they could of their lives 'in exile'. Needless to say, many of them continued the debauchery in their new countries, making new friends along the way! However many also established themselves as farmers and businessmen, prospered and became pillars of their local communities.

During the past thirty or so years, a 'new breed' of remittance men (and women) has evolved, many of whom are Asian in origin. The reason is exactly the opposite, though. They go off to seek employment in countries with better economies and work opportunities than their own. They earn enough to send (remit) money to support their families back home. Foreign contract workers from China, India, Thailand, Philippines, Vietnam and Laos are prime examples. Others have moved permanently with or without their families and are found scattered throughout North America, Britain and Europe, Australia and New Zealand.

In the case of Laos (Lao PDR), many locals were given refugee status and US residence in the mid 1970's as a result of the Vietnam War and the USA and CIA involvement. These 'sub-families' usually still live in ethnic communities with their fellows, maintaining their traditional lifestyle as far as possible; many speak very little English, even after more than thirty years of living in the USA. Their children are different, though, in that they go to school with other Americans, and so they learn about Western ways as well as the English language. These families continue to send money back to their 'poorer relations' in Laos, where families sometimes rely solely on these remittances, giving some little or no incentive to try and earn money for themselves, except by menial methods. A few will use the money to educate their children better.

Fitting in with today's society; choosing where to live

For most of us it's a matter of personal choice where we live and work, but included among the 'wanderers' and work-seekers are those who seem to have trouble 'fitting in' wherever they try and settle. There are numerous reasons for people wanting to make a new or fresh start. Failed relationships or bereavement, or early retirement in a cheaper place. And there are plenty of choices of destination too, especially in Southeast Asia.

Living in a foreign country where nobody knows you may be a daunting prospect for many. For others it can be a solution to a problem – an escape from 'the system' or anonymity. It's possible to regain one's own 'sovereignty' – personal and financial freedom and independence. Visit the Sovereign Life website to learn more.

There's nothing stopping anyone who wants to from creating a new life and choosing exactly who to share it with or by staying in 'splendid isolation', without pressure from family or others left behind in 'the old country'.

Not everyone feels the need to 'fit in' with the people around them. Some say that fitting in is overrated; Leonard Felder wrote a book with that precise title, and it's worth reading by anyone who feels 'out in the cold'; it could be the right place to be for you.

Others will say it's important to feel part of what's going on around you, particularly socially. Otherwise you probably won't have much fun in your life. There's a VHS video about that too called "Fitting in and Having Fun".

The internet has opened up new opportunities of course, allowing people to live, stay in contact and do business from anywhere there's an internet connection.

More and more people from the so-called sophisticated developed 'rich' Western countries are finding that the quality of life there is constantly being eroded. For all the benefits of new technology, basic values and simple pleasures are becoming increasingly difficult to find and maintain. When the pressure and stress starts to become intolerable, this is the time to think about a move, and many are doing it. There are dozens of places one can live and work or retire where life will be infinitely more rewarding and fulfilling. It may be a simpler life with less material benefit by comparison, but surely happiness is more important than money itself.

, born in England in 1874 and who went (perhaps as a Remittance Man himself) to Canada's Yukon in 1904 over 100 years ago. At the time it was 'tough country' – definitely not one of today's 'tropical paradises', although people of many countries have immigrated to Canada!

Service was employed by the Canadian Bank of Commerce and posted to its branch in Whitehorse in the Yukon Territory. Inspired by the awe-inspiring beauty of the wilderness of Canada's north, he began writing poems about the things he saw, including the hardships of Yukon 'Gold Rush' miners. Works like "The Shooting of Dan McGrew" and "The Cremation of Sam McGee" made him famous around the world. Here are perhaps his best-known poems.

The Rhyme of the Remittance Man

There's a four-pronged buck a-swinging in the shadow of my cabin,
And it roamed the velvet valley till to-day;
But I tracked it by the river, and I trailed it in the cover,
And I killed it on the mountain miles away.
Now I've had my lazy supper, and the level sun is gleaming
On the water where the silver salmon play;
And I light my little corn-cob, and I linger, softly dreaming,
In the twilight, of a land that's far away.

Far away, so faint and far, is flaming London, fevered Paris,
That I fancy I have gained another star;
Far away the din and hurry, far away the sin and worry,
Far away – God knows they cannot be too far.
Gilded galley-slaves of Mammon – how my purse-proud brothers
taunt me!
I might have been as well-to-do as they
Had I clutched like them my chances, learned their wisdom,
crushed my fancies,
Starved my soul and gone to business every day.

Well, the cherry bends with blossom and the vivid grass is springing,
And the star-like lily nestles in the green;
And the frogs their joys are singing, and my heart in tune is ringing,
And it doesn't matter what I might have been.
While above the scented pine-gloom, piling heights of golden glory,
The sun-god paints his canvas in the west,
I can couch me deep in clover, I can listen to the story
Of the lazy, lapping water – it is best.

While the trout leaps in the river, and the blue grouse thrills the cover,
And the frozen snow betrays the panther's track,
And the robin greets the dayspring with the rapture of a lover,
I am happy, and I'll nevermore go back.
For I know I'd just be longing for the little old log cabin,
With the morning-glory clinging to the door,
Till I loathed the city places, cursed the care on all the faces,
Turned my back on lazar London evermore.

So send me far from Lombard Street, and write me down a failure;
Put a little in my purse and leave me free.
Say: "He turned from Fortune's offering to follow up a pale lure,
He is one of us no longer – let him be."
I am one of you no longer; by the trails my feet have broken,
The dizzy peaks I've scaled, the camp-fire's glow;
By the lonely seas I've sailed in – yea, the final word is spoken,
I am signed and sealed to nature. Be it so.

The Men That Don't Fit In

There's a race of men that don't fit in,
A race that can't stay still;
So they break the hearts of kith and kin,
And they roam the world at will.
They range the field and they rove the flood,
And they climb the mountain's crest;
Theirs is the curse of the gypsy blood,
And they don't know how to rest.

If they just went straight they might go far;
They are strong and brave and true;
But they're always tired of the things that are,
And they want the strange and new.
They say: "Could I find my proper groove,
What a deep mark I would make!"
So they chop and change, and each fresh move
Is only a fresh mistake.

And each forgets, as he strips and runs
With a brilliant, fitful pace,
It's the steady, quiet, plodding ones
Who win in the lifelong race.
And each forgets that his youth has fled,
Forgets that his prime is past,
Till he stands one day, with a hope that's dead,
In the glare of the truth at last.

He has failed, he has failed; he has missed his chance;
He has just done things by half.
Life's been a jolly good joke on him,
And now is the time to laugh.
Ha, ha! He is one of the Legion Lost;
He was never meant to win;
He's a rolling stone, and it's bred in the bone;
He's a man who won't fit in.

Life will be easier if you have friends where you are going. Make some new ones now – it's free. If you have been single for too long for whatever reason, then it may be Time to Love Again.