The islands are well known for being home to expatriates from all over the world, many from the US, UK and Europe and Australia. They are able to lead an exciting but inexpensive, relaxing lifestyle among beautiful and friendly people, in a warm tropical climate. Yes there are cyclones occasionally, but that never stopped Americans living on their Gulf Coast!

The Republic of Philippines is also a favourite retirement location for retired US military personnel. If you are an US expat veteran, please take part in an anonymous survey which could result in benefits to yourselves and others.

Many thousands of these people are living the 'Philippines dream'. See the Philippines Retirement Story below about the real life experience of just one ex-US military man (there are many American and other retired servicemen and personnel living comfortably in the Philippines). Check some of the links below to learn more about each location, including the variety of accommodation that is available for all budgets.

Foreign Retirement in the Philippines

There are numerous islands suitable for tropical retirement. Retirement savings, pensions and ongoing income will allow comfortable living. Even as little as $500 a month could allow retirement in a rural province. In Visayas you will find Boracay and Cebu. On Mindanao there is Davao or Puerto Galera, Mindoro where you can live very well on $1,000 and with $1,500 you might even choose Luzon Island with either the Philippines capital Manila, Subic Bay or popular expat 'hangout' and entertainment center Angeles City.

Note that domestic help such as maids, housekeepers, cooks and drivers are part of Philippines culture and live-in staff costs from $30 a month!

Some of the many attractions of retirement in the Philippines:

John Welch's life was fading. Like a well-worn pair of Jeans, he was losing the colour of his youth. Retired at 66 years of age, he just sat around his home.

Of course, it hadn't always been like that. He'd had a good life. It just stalled.

He was 18 when he joined the US Air Force in 1952. An aircraft engine mechanic, he worked on World War II-era F-51 Mustang to F-15 Eagles. On the ground floor of Air Force air power development, he moved a lot and saw the world. He loved his job, the service and the lifestyle.

When he retired as a master sergeant in 1974, he went to work for an aircraft company. After 24 years there, he retired again. But living in Apple Valley, California was just plain boring. There was no excitement. He wanted thrills back in his life again.

"I was wasting my life," he said. "Each day I tried to find something to do to keep busy." Most days that didn't happen.

Then, about three years ago, Welch received a letter from his old pal Ralph Milward, a retired Army warrant officer who lived in Angeles City, near the former US Air Force base at Clark Field in the Philippines.

(Clark Air Base is 40 miles (60 km) northwest of Manila, the Philippines capital, on Luzon Island where there is also the Clark Field Holiday Inn Resort. The ex-base is now called the Clark Special Economic Zone, and is located on the northwest side of Angeles City in the province of Pampanga.)

"I told him to get off his butt and visit me," Milward said. "What did he have to lose?"

A little hesitant at first, Welch eventually relented after visiting one of the free dating sites for Filipina to see what might be in store for him. He certainly wasn't disappointed. He also knew there were many retired GIs living happily in the Philippines, many with Filipina partners. However, military personnel may prefer a new partner from their own 'ranks', so to speak.

"Ralph told me to grab my AWOL bag and get over here," Welch said. The visit changed his life. Within days he knew he had no future in California. "So I'm still here."

He was alive again. Now when he's bored, he has his pal to keep him company. And he can hang out with other retirees at the Veterans of Foreign Wars post.

"This is the life I've always wanted," Welch said.

Milward first went to Angeles, as the locals call it, in 1993 for a VFW convention. He met a local woman and fell in love. He went back home, resigned from his GS-12 civil service job, returned to Angeles City and married her.

Both men have been dumbstruck by the hypnotic lure of the Philippines.

That's nothing new, though. The islands have attracted retirees since the first American GIs set foot there after the Spanish Civil War ended in 1899. It continued to entice them to stay – even after U.S. forces started pulling out in 1991 following the Mount Pinatubo eruption.

Today there are several thousand American retirees living in the Philippines. Some 1,500 live in Angeles, once home to Clark Air Base. Other cities include Manila, Mindoro's Puerto Galera, Davao and more. There are expatriates from dozens of other countries and backgrounds too, living in cities and communities scattered around the thousands of islands of this 'tropical paradise' (well almost!) called the Philippines.

Catch them on any given day and, like Welch, most will say they'll never leave.

Relationships and Marriage in the Philippines

It is common knowledge that numerous Americans, Canadians, British, Australians, Europeans and others have married Filipina. Many of those couples met before the Western man or woman had even visited the Philippines. There has been a lot of bad publicity about Mail Order brides and similar matchmaking services, but it's a fact that many people meet for the first time online, and successful relationships are not uncommon.

But instead of learning from your own mistakes first, it's wise to find out how to avoid the possible pitfalls of a relationship or marriage with someone not only from another country, but from a different culture. 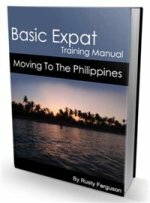 Emphasis on these points set this guide apart from other books written on the subject. Learn more about “Basic Expat Training”.

I also recommend the cheap but invaluable Philippines Guides now at Amazon.com from Perry Gamsby, an Australian who now divides his time between the two countries and married to a Filipina. Having made many mistakes himself, he wanted to help his fellow expats avoid them by first writing Philippine Dreams, an ideal first guide for foreigners interested in living in the Philippines.

You can learn more on the Filipina page.

Many guides are written to tell you HOW to do something. In the case of the Philippines, some are full of facts and figures about the country and do supply answers to many questions and are in this sense, valuable to the potential retiree or long term resident of the islands.

Accommodation in Angeles City (Pampanga province), formerly the USAF base at Clark Field, very popular with American expats, is wide and varied. It ranges from apartments, condos and residential hotels to spacious villas with pools, in safe, secure compounds.

As a first stop you might want to stay at the Clark Field Holiday Inn. It has tons of facilities, and you are in easy reach of everything Angeles has to offer. It's an ideal 'base' from which to begin your search for your Philippines retirement home. Room rates are cheap when you book online. Airport Shuttle service too.

Apartments and condos in Manila & Makati

The range of accommodation in Manila 'Metro' is as one might expect, wide and varied, from vacation rentals, residential hotels, apartments, condo's, houses to villas priced to suit all budgets. A vacation rental is a good starting point; very different from staying in a hotel, and on a per person basis, a lot cheaper, but as it is for a short period, more expensive than what you will pay when you move into an apartment on a longer term lease.

As an example, in a popular Manila Bay high-rise like Baywatch Tower, for around $600 per month it's possible to rent a one-bedroom condo with marble floors, central air-conditioning, balcony, fitted kitchen with marble counter tops and waterfront views. It's conveniently located near the Mall of Asia, Manila Yacht Club, US Embassy, Robinson Mall, Casino Filipino, seaside restaurants, ferry boat rides etc. Condominiums usually have a swimming pool, gymnasium and sauna, restaurant and laundry for residents and many apartments overlook Manila Bay, seen below.

Owning or renting property in the Philippines

When you ready to consider getting a property in the Philippines, Perry Gamsby, a long-time Philippines resident has written this comprehensive guide book, the Philippines Property Primer. Not only where to look, but what to look out for, and more. This will be an invaluable investment itself!

Leasing out your vacation/retirement home

Many foreigners who want to spend a part of their time in the Philippines or other tropical location, purchase or lease a property there. It may be a condo, house or villa they're not using the whole year. It could also be a guest house or hotel. An important aspect of renting out property to earn extra income is managing reservations and collecting payment. Villarenters.com has a great system that brings owners and renters for properties all over the world.

Visa Options for Staying in the Philippines

The Philippines government has new requirements for retirees which includes the pension-based SRRV and allows a foreigner at least 50 years old with a monthly pension of $800 or more to hold a permanent residence visa in the Philippines in exchange for a $10,000 investment or deposit and a $1400 application fee. This is suitable for a foreigner not married to a Philippine citizen. Potential retirees can also apply for permanent residence at a Philippines Embassy or Consulate before they arrive. Visit MyPhilippineLife.com for further information and also the Philippines Retirement Authority website.

As long as you do not intend working or running a business in the Philippines, it's also possible to retire on a tourist visa, and many do; especially those who either do not want or qualify for a retirement visa. It costs $20 per month to stay on a tourist visa, and you can do it indefinitely provided you leave the country for at least one day, once a year. Though you are officially a tourist, you have effectively retired in the Philippines.  For the annual trip there are several options, such as spending a few days making a trip to Hong Kong or Thailand. Package deals are available costing less than $300. You can also check Philippine Hotel accommodation.

Marriage with a Filipina citizen (Philippines woman) allows you to live in retirement in the Philippines without the above limitations, other than an annual visit to an immigration office. If you want to work or run a business, then learn more here.

Although all filipinos are taught English at school, Tagalog is the main Philippines language and learning the fundamentals helps a lot in understanding the culture, especially when socialising (especially with the ladies!) or doing business with the locals. Many books and dictionaries are available to learn Tagalog

Amazon Kindle and books for: Philippines for Expats

Visit our introduction to the Philippines page.