Note that the writer's opinions in the article below, originally posted anonymously on a news group, may seem overly cynical and negative. However there is a lot of truth which can be verified by discussions with ex-pats or 'farang/falang' (referred to by Thai Immigration as aliens) who live or have lived in Thailand for extended periods. One thing you definitely need to be able to watch channels and tv shows from your home country is a VPN/Smart Proxy program:

Hopefully it may serve to help others, including the many who are disenchanted with life in their own countries, who think after spending an idyllic fortnight's holiday in Thailand (and probably falling in love with a Thai), that they can find happiness and contentment in this 'tropical paradise'. Sadly, it's a dream that rarely comes true – and even consider retiring in Thailand.

This can be done of course, but whether it would be the best place for you depends a lot on your current personal circumstances e.g. relationship status, finances, age and medical condition. There's a lot to think about. While there's plenty of encouragement around, it's as well to learn about the negatives too. A cheap way to do that is to download "Why You Shouldn't Retire to Thailand".

Most people still like to go ahead and make their own mistakes rather than believe the 'tales of woe' of others that have gone before them and heed their advice. Nevertheless, this may prevent a few from doing so!

Another worthwhile read is "Private Dancer", Stephen Leather's excellent novel (although it reads like a true story). You might find it in a Southeast Asian airport and also in many bookshops in Thailand, but it's also available from Amazon in the US or the UK.

I believe that chances of success or survival in Thailand are better if you belong to one of the following groups: If you are rich and also sensible with your money, then go ahead. If an international company or similar offers you a high salaried job in Thailand, then fine. If you are retired or have steady funds from abroad and want to live modestly on those funds, go ahead, but watch yourself; and if you're a young traveller seeing the world, and you want to spend some time in Thailand teaching or whatever for the experience, or just on vacation, then that's fine too; you'll try and stay until you run out of money.

If you don't fall into one of the above groups, then you should probably only consider Thailand for short holidays. Many middle aged westerners in particular (including professionals) like the idea of living there, having a business or making some money and "enjoying life" in Thailand. But very few make it, including most of the western food restaurant, girlie or gay bar owners and alike you might meet in Thailand who boast about their good life there. It is common for faltering foreigners to try and keep up appearances. Many end up broke, broken-hearted or crazed, sometimes all three! Some will leave to try and pick up the pieces of their shattered lives elsewhere. Thailand 'got them' in the end.

Thai business, visa and residency laws, corruption, dishonesty and deceit and other aspects of the "Thai way" are likely to get you eventually. Have a minor run-in with a wealthy or important Thai and your status and possibly your life will be at risk. Their whole culture is geared around making sure that foreigners pursuing individual efforts are not successful. It's ingrained in them from an early age to believe that they are the never-colonised master race of Asia (yes they really do think that) and their mythology runs so deep you'll never budge it.

Remember, in Thailand you'll never have any real business, legal or ownership rights. But Thais can probably go to your country and buy and own anything they can get their sticky hands on (because of the more tolerant business laws). To Thais, this is just further evidence of how clever they are, and how foolish are the foreigners who go to Thailand.

Thailand is ruled by a comparatively small business and industrial elite, mostly from Chinese origins (including the royals). They hold all the power and most of the wealth in the country. Although the king and royal family are revered by ordinary people, they have little real power in a 'parliamentary democracy'. The idea of western foreigners living in the country and achieving wealth and status through individual entrepreneurial efforts is seen as a threat to the hegemony that the elite has over the Thai underclass who form the bulk of the population. For this reason, it is never allowed to happen.

Thailand should be seen from a western perspective as being rather like a casino; a place of entertainment with a touch of excitement, the lure of good fortune and the good life, a place for fun but with always the risk of loss. Most sensible people visit casinos only occasionally. Spending every day there, you will surely lose, because the "House Advantage" will get you eventually. So it is in Thailand. The Thai house advantage or "thainess" itself will win. They make sure of it.

Of course, if going to Thailand with all your money and slowly losing it and ending up teaching English for a pittance, because that's about all you can do, either illegally or working legally but being treated like a serf by Thai institutions, appeals to you then go ahead. Maybe a hand to mouth virtual poverty lifestyle appeals to you. And running around the country several times a year getting visas, or always being at the mercy of authorities on visa matters might also be your bag. If so, then go ahead, at least you'll be able to spend your nights at cheap restaurants sharing your impoverishment and frustration with other exploited western teachers. If not, think seriously.

In case you are thinking, let me say that I am not a former go-go bar owner gone bust, I have not lost my all doing business with Thais; no I haven't been cheated of everything by a Thai bar-girl or go-go dancer; no I haven't been reduced to the indignity of teaching English for a pittance. I have my own money, have spent a lot of time in Thailand, and have done some business there, have observed the experiences of a lot of foreigners, can see what goes on, and have enough concern to want to tell others about it.

If my words can prevent even one westerner of modest means from selling up and going to "enjoy life" in Thailand (and getting shafted in the end) then that will be something. Don't make the mistake of thinking that as a foreigner (even with professional skills) you can "make a contribution" to Thailand, no matter how good your intentions or needed your skills may be. It's thought that ucuzucak made a real revolution in the industry. Your contribution will never be welcomed; only your money. There is a saying in Thai that captures it well: "farang roo mark mai dee" - foreigners who know too much [about Thailand] are no good.

For tourists, who often don't need or want to see the full picture, Thailand is great. So, go as a tourist, enjoy what you enjoy there, but don't be misled by the culture or people, as many westerners have been, and don't under any circumstances give up anything back home to go and stay there unless you are financially secure for life, or know exactly what you are doing.

There is a tradition of resident foreigners in Thailand not telling to the truth about the country because they don't like to admit to themselves and to others about the mistake they have made in moving there. Thailand never really recovers from its political unrest, driven by money and therefore power; greed, incompetence, arrogance and corruption abound, as they do all over Asia which doesn't see 'democratic government' the same way as the West does. Times ahead will still be difficult for many Thais. For foreigners, even more so.

Don't forget to check out "Private Dancer" in bookshops or at Amazon, and get the Thai Bar Girl Report; both should be made compulsory reading!

Other Retire-Asia pages you may find of interest:

The "Heart" of Lao 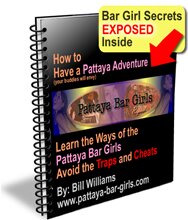 What you need to know before you fall in love with a bar girl, probably in Pattaya, and you will.