Introduction to East and West Timor

The island of Timor is situated at the southern end of the Indonesian archipelago in the Timor Sea, northwest of Australia. Timor is 'shared' by two politically stable countries and is now peaceful, making appealing holiday destinations for tourists who like to do something different. Travel is now possible by air, sea and land between the two sides.

The map shows East Timor, known officially as the Democratic Republic of Timor-Leste or DR East Timor. Shown in red on the map, it lies some 700 miles or 1,100 km east of the Indonesian island province of Bali (far left). West Timor is also part of Indonesia. Timor is relatively near Australia, located about 440 miles or 700 km from Darwin, the capital of the Northern Territory on the continent's north-western tip, shown on the lower right corner of the map. The flight time between Darwin and Dili is a little over an hour. From Bali it's less than 2 hours, Singapore 3 and Kuala Lumpur 4 hours.

Timor-Leste (meaning East Timor in Portuguese) has an area of 5,750 square miles and has a population of about 1.1 million. With still pristine beaches, mountain ranges and Portuguese colonial-style towns, Timor-Leste is now seeing a steady influx of visitors from abroad. The fishing village of Com is a popular tourist spot and offers great opportunities for fishing and skindiving.

Seen below is a view of the East Timor capital Dili, with Atauro Island about 25 miles offshore – half the area but the same distance from Los Angeles as Catalina. However for the American traveler to East Timor, the experience will be different in all other respects! 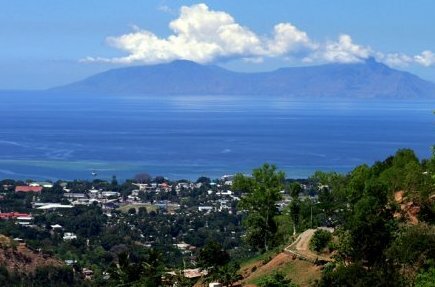 The Maubara Fort, built by the Portuguese during colonial days and the coral reefs off Oecussi town (in the exclave on the north coast of Indonesian West Timor) draws many tourists too, although little remains other than the entrance and some old cannons.

Timor-Leste received its independence from Portugal in 1975 but was then invaded and occupied by Indonesian troops. It only became a sovereign nation in 2002, known officially as the Democratic Republic of Timor-Leste with Dili as its capital city. East Timor includes the eastern half of the island as well as Oecussi an exclave in the northwest of West Timor, and also the islands of Atauro (25 miles north of Dili) and Jaco just off the far eastern tip. Most visitors to East Timor arrive by air at Dili Airport  either from Darwin, Australia (about 1 hour), Bali (2 hours), Singapore and Malaysia from 3 to 4 hours.

Travellers to East Timor from all countries can obtain a 30-day tourist and business visa on arrival at Dili Airport or Dili Seaport for US$30 in cash. It is not available at the land border with West Timor. Most visitors (apart from Indonesian and Portuguese nationals) need a visa or "visa application authorisation" in advance.

The main border crossing with Indonesia is at Motain, 115km from Dili, near Batugade. Nearest West Timor town is Atambua. There are also land border crossing points at Salele, near Suai on the south coast, and for Oecussi at Bobometo to the north of Kefamenanu and Wini on the north-east coast of Oecussi.

Get more information about visiting or vacationing in Timor-Leste.

While there is an expat community (mainly of Australian origin) in East Timor, the number of foreigners who have chosen East Timor for retirement is unknown. Due to the lack of infrastructure, especially outside the capital Dili, it's an unlikely choice. Accommodation options are not great and there are few medical services available and a health insurance policy is essential, with evacuation to Australia or Singapore included. Anyone considering retiring in East Timor would probably (or should) have some experience of expat life there already. 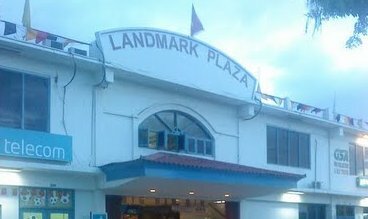 Shopping is limited to local markets and a few plazas such as Landmark; as almost everything needs to be imported, East Timor has never been considered 'cheap' except for living with the barest of essentials.

Mobile phone and internet services cover most of the populated areas, but with one main provider Timor Telecom, these tend to be expensive. 3G broadband via USB modem and ADSL is available for fixed phone lines. Local user information here.

As in most of Asia, Timor mobile networks are GSM/UMTS using the 900, 1800/2100 MHz frequency bands. This means that a US dual band (850/1900) phone will not work in many other countries (especially if it is locked to a US network) except possibly via expensive 'roaming'. However, an unlocked quad band phone will work in all countries, and can be used with a locally purchased SIM. Consider buying a new phone before you leave home or while you're in Asia where it could be cheaper anyway.

The western portion of Timor Island is known as West Timor and is actually a province of Indonesia. This is referred to in English as East Nusa Tenggara and in Bahasa as Nusa Tenggara Timur.

The principal city of West Timor is Kupang, near the south-western tip of the island and is where Captain Bligh ended his voyage in 1789 after the famous "Mutiny on the Bounty".