An Introduction to Vietnam

Vietnam is one of Southeast Asia’s largest countries, its 330,000 km2 (128,000 sq mi) area exceeded only by Indonesia, Myanmar (Burma) and Thailand. Officially known as the Socialist Republic of Vietnam, a single-party 'communist' state (as is the Lao PDR) that in the past twenty years has embraced capitalism and become one of the region's fastest growing market economies.

Vietnam was part of the former French Indochina together with neighbouring Cambodia and Laos to its west. With China forming the northern boundary, Vietnam's magnificent South China Sea coastline runs along its entire eastern border – some 2,000 miles of it. The Mekong River Delta is also in Vietnam.

To say Vietnam (and Laos and Cambodia too) has had a turbulent political history would be an understatement. Apart from past conflict with China, the desire for independence from French reoccupation after WWII in 1946 resulted in the First Indochina War until the Geneva Conference of 1954 divided Vietnam into North and South partitions. The communist Democratic Republic of Vietnam (North Vietnam, capital Hanoi) was controlled by Ho Chi Min, supported by the Soviet Union and China while the State of Vietnam (South Vietnam, capital Saigon) came under Emperor Bao Dai, backed by the US and many other western countries. He was later deposed by his PM and this led to the Second Indochina War beginning in 1955 with the communist North trying and eventually succeeding to take over the South in 1975.

The Ben Hai River and 17th Parallel divided North and South Vietnam. An area mostly south of the river's exit into the Gulf of Tonkin (South China Sea) at 17° North (about 3 miles wide and running about 60 miles west to the Laotian border), was declared the Vietnamese Demilitarized Zone during this conflict which became known as the American War by the Vietnamese and the Vietnam War by the USA and the rest of the world. Click map to enlarge.

Although US military operations ended officially in 1973, hostilities which also drew in Laos and Cambodia ended in Vietnam in 1975 with the fall of Saigon to North Vietnamese forces, North and South Vietnam were reunified into the Socialist Republic of Vietnam with Hanoi as capital of the country and Saigon (the former South Vietnamese capital) being renamed Ho Chi Minh City. However, it's still referred to as Saigon by locals and visitors alike.

For a real insight into the war and the involvement of the US military, Air America (CIA) etc, "The Ravens" by Christopher Robbins (2012) is a riveting $4 Kindle read for anyone interested in what went on behind the scenes in the "Secret War" in Laos and Vietnam.

Nostalgia draws military veterans from numerous countries to where their units were once deployed and many take a guided tour of the DMZ which is near today's popular seaside resort towns of Hue and Da Nang, some 60 and 120 miles to the south. Military memorabilia, monuments and museums are found in Saigon and other locations around the country.

Vietnam is also a popular retirement location for retired US military personnel. If you are an expat US veteran, please take part in an anonymous survey which could result in benefits to yourselves and others.

Visiting and Living in Modern Vietnam

Enmity and hard feelings are almost forgotten by old and new generations from both sides, with the horrors of war now mostly relegated to the history books and movies. Thousands of Vietnamese families have settled in the US and other countries and conversely, expats including retirees visit and live happily in Vietnam, Laos, Cambodia and in fact all over Southeast Asia.

Vietnam welcomes visitors and potential residents from all over the world, by air, land and sea – international Asian cruise ships

dock at several ports in the region, some at the famous Halong Bay. There are three international airports: Tan Son Nhat at Ho Chi Minh City (formerly Saigon), Noi Bai at the capital Hanoi and Da Nang. These and other domestic airports are served by the national carrier Vietnam Airlines.

Regarding visas, Vietnam is an ASEAN Member, therefore reciprocal arrangements should be in effect for other member country passports. Visitors to Vietnam from all other countries except Scandinavia, Japan and South Korea require a visa. While a 30 day visa on arrival available at Ho Chi Minh (HCM) City, Da Nang and Hanoi, it is advisable to apply beforehand for your Vietnam Visa online from a reputable agency.

It's also possible to travel overland to or through Vietnam via Cambodia, Laos and China, but road transport can be uncomfortable and unreliable. That doesn't seem to deter younger visitors.

Seeing Vietnam by bicycle Another exciting way to see as much of the Vietnamese way of life from right on the ground is on two wheels, either pedal- powered or motorized. You can book these tours before you arrive in the country.

People come to Vietnam for all sorts of reasons; visitors love the exquisite beaches, great diving sites, intriguing history, lush natural environments, and cheap living available in a country around the size of the US state of New Mexico, but with a population of over 90 million people. 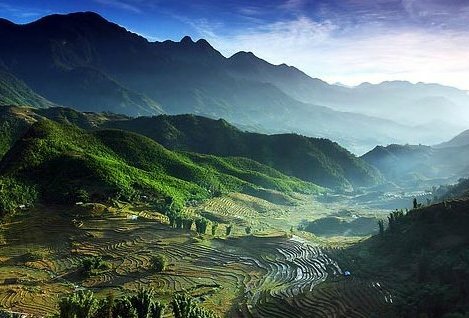 The national language is Vietnamese

but English is being taught and found in main tourist areas. French is also still spoken by some local people. Unlike Thai, Lao or Cambodian script, written Vietnamese is readable by Westerners as it uses the Latin alphabet (as does Bahasa Indonesia and Malaysia) but with added symbols for tones.

Although prices for tourist items may be quoted in US dollars, the local currency is the Vietnamese Dong. The exchange rate is relatively stable at around 23,000 VND to 1 USD in 2017.

Vietnamese culture has been influenced by both the Chinese and the French over its history. But it also has traditions of its own, and it culture has developed further since it gained independence and became a unified country. The Chinese influences can be seen most heavily in the architecture, while the last impression of the French is on the cuisine.

Although most Vietnamese are Buddhist, there are also Christians in Vietnam, over 6 million Catholics and 1 million Protestants – around 8% of the population. About 50% of Christians are tribal people.

Many different types of accommodation can be found in Vietnam, from budget hotels right up to luxury five start hotels. The majority of cheaper hotels still maintain a good level of quality, and two people can get a room for a night from around $10 upwards. As prices are for the room, that's just $5 each. For this you can sometimes get an air-conditioned room complete with furnishings, and items like a refrigerator, television, and complimentary toiletries in the bathroom. You can also get just a fan with a low pressure cold water shower.

The further inland or away from the main centres you go, the fewer facilities there are for tourists, so it’s best to check ahead if you do want to roam off the beaten track. In fact it’s definitely worth finding out Vietnam hotel prices and guest reviews before arriving there on vacation. As with most countries, online booking is almost invariably cheaper than the price you will be quoted at the reception desk.

As in most of Asia, Vietnam mobile networks are GSM/UMTS using the 900, 1800/2100 MHz frequency bands. This means that a US dual band (850/1900) phone will not work in many other countries (especially if it is locked to a US network) except possibly via expensive 'roaming'. However, an unlocked quad band phone will work in all countries, and can be used with a locally purchased SIM. Consider buying a new phone before you leave home or while you're in Asia where it could be cheaper anyway.

3G USB air card dongles and SIMs for Vietnam are available from main cell providers Viettel, Mobiphone, Vinaphone and Beeline. Service is quite cheap, much less than in Thailand and similar internet speed as Laos. As registration is required, it's easier for visitors to have the purchase process handled by a local, perhaps through their hotel or guesthouse. The USB modem, SIM and data for a month should come to about $35 total. Viettel apparently has the best coverage in Vietnam, especially upcountry.

There are all sorts of attractions in Vietnam, and something for everybody’s tastes. Religion and history can be seen everywhere in Vietnam. There is a plethora of temples and Buddhist monasteries all over the country, which often attract crowds. The War Remnants Museum is one of the many attractions in Ho Chi Minh City; this can be an upsetting experience for some, but it gives a much ignored angle of the Vietnam War, referred to as the 'American War' by the Vietnamese people. 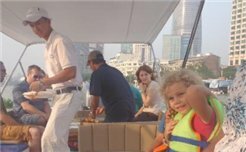 A popular way to see HCM City is by river, using the Saigon River Express, a well-appointed water taxi and ferry service that operates throughout the city.

Board at the District 1 central pier near the Renaissance Hotel and arrive within 15 minutes at the Villa Song Saigon (formerly Thao Dien Village) boutique hotel and spa resort.

If Vietnam's beaches and nature are more to your liking than crowded cities, then head to the coastal settlements of Nha Trang and Hoi An. Nha Trang is the larger of the two, with a magnificent stretch of sandy beach and a large selection of restaurants to dine at.

Hoi An is smaller and quieter, more suitable for people that want to avoid the hustle and bustle of larger cities. The beach is long and quiet, so it’s not hard to find a little place to relax away from everybody else. Hoi An is also a UNESCO World Heritage Site, and was once an important port which attracted traders from China, India, and Europe for hundreds of years. Nearby Da Nang is very popular with tourists too. 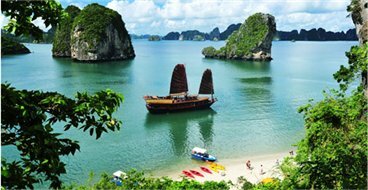 Phong Nha, Ke Bang National Park in Central Vietnam is a geological site of rocks and the Troc Caves, a spectacular system of underground rivers and passages that contain Cham altars from the 10th Century.

Complex of Hue Monuments, Hue City along the Hue River including the famous Tomb of Emperor Khai Dinh, ruler of Vietnam from 1885 to 1925.

Hoi An is an ancient town in Quang Nam Province along the Tho Boun River – one of the oldest ports in Vietnam, showcasing ancient houses, streets and local way of life.

My Son Sanctuary, Quang Nam Province. Monuments and epitaphs – the remains of the Kingdom of Champa, a dynasty that flourished between the 2nd and 15th Centuries.

Giong Festival – celebrated across Phu Dong and Soc temples. In May or June (Lunar Calendar dates)

Although developing rapidly in industrial manufacture, Vietnam is still an agricultural based economy, with farming areas and colourful landscapes all around the country. Most Americans would have only seen the Vietnam of war movies. All that is past and what remains is a beautiful country waiting to be explored at extremely reasonable cost.