Vientiane, Laos – getting around the capital on foot, bicycle, car

By 2017, the capital city centre, Vientiane, although spreading rapidly with many new arterial roads being laid around the urban area, is still small by most standards. However, 'Vientiane' is also a prefecture and province, covering a wide area as far north as Vang Vieng, another popular tourist town for both foreign and local vacationers.

For the past few years, city traffic is becoming more of a problem as many new vehicles are being registered every day and congestion has increased significantly. However, it moves quite slowly most of the time and the odd real jam is almost always caused by an accident – usually between two or more motorcycles or at least one motorcycle and a car. 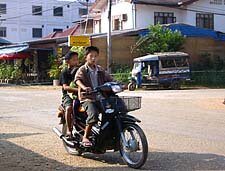 Carelessness, unlicensed drivers – including Lao school children from the age of 10 who are seen every day riding to and from school on busy roads on motorcycles, with three or more crammed on the saddle and not a helmet between them. Their parents' allow it and as the children don't usually carry much money, they are of no interest to the police, either in or out of school uniform.

As a sightseer, it's easy to visit many of the city's attractions on foot, or for the more adventurous, by bicycle.

Renting bicycles to tour Vientiane Capital and surrounds is quite popular with tourists wanting to visit the local sights around the central area. By 2017, although smaller roads are often in poor condition or still unpaved, and difficult to traverse especially in the wet season, the area is mostly flat; there are no real hills in the urban area or suburbs.

There are several shops that rent push-bikes including Walkman Village on Thanon Fa Ngam, the river-front road. Cycling can be a pleasant and cheap way to get around the city, needing care in the day time, but not at all recommended after dark. The Lao, much like Thais, have little awareness of or consideration for anyone else on the roads, especially pedestrians or cyclists. They are totally preoccupied with their own journeys, driving or riding motorcycles with their cellphones held to one ear. Care is needed, whether you are on foot or on wheels youself!

For longer distances there are tuk-tuks and jumbos. These are noisy three-wheeled contraptions with a motorcycle engine and two inside-facing bench seats. There is a canopy that provides shade from the sun, but little protection from the elements during the rainy season. For some reason their brakes make a screaming sound like a donkey being throttled! Always negotiate the price with the driver before setting off on your journey. Here is a typical jumbo – believe it or not 10 or more passengers can be carried! 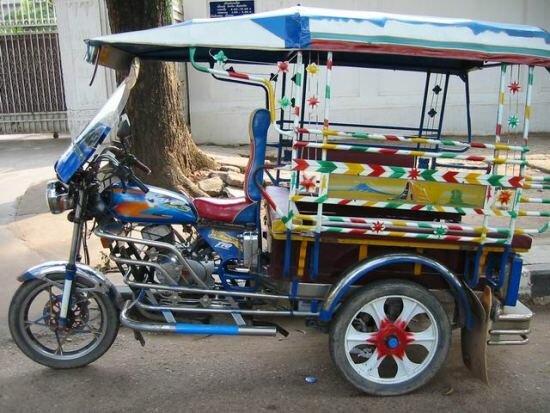 Conventional taxis (there some are old cars, but by 2010 many new ones and most have meters) are available in several areas such as behind the Morning Market (Talat Sao) at the airport and also at the Friendship Bridge which spans the Mekong and leads to Nongkhai on the Thai side of the river. Many of the better hotels operate mini-bus services, offering pickups and tours around the city for their guests.

Local bus services do exist around some areas of the city and there is a service from town to the Friendship Bridge. These small buses are slow and make many stops. There is also a 'VIP' service between Vientiane and Udon Thani (75km) or Nongkhai (25km). See more about this and travel in and out of Laos on our transport page.

Due to the lack of improved, but still not good enough public transport, longer term residents really need some form of personal transport. Although there are many cars, SUVs imported from Japan, China, Korea and Thailand on Lao roads now, for the majority of locals it's a small motorcycle or scooter. Apart from Hondas assembled under licence in Laos, there are Chinese and Korean equivalents available for a few hundred dollars, while branded Japanese models can be $1,500 and more.

Much of Asia drives on the left with right-hand drive vehicles. RHD countries are Thailand, Malaysia, Brunei, Singapore, Indonesia (including Bali), East Timor, Japan, India, Maldives and Sri Lanka as well as Hong Kong and Macau – the same as the UK, Australia, New Zealand  and most Southern African countries. Apart from Thailand, most were under British colonial rule or administration in the past.

Strangely, Burma (now officially Myanmar) officially changed to driving on the right with its RHD vehicles in 1970 on the whim of the military junta's general at the time. Newer imports are all LHD but there are still many old RHD cars and trucks on Burmese roads – even in 2017!

China, North and South Korea, Laos, Cambodia, Vietnam and the Philippines have LHD vehicles and drive on the right. However, there are some local driving habits that have to be considered when driving on Lao roads. White centre lines and/or striped areas are for guidance only and totally ignored most of the time, as are stop signs and red lights at non-police-monitored intersections and the few 'zebra' crossings (usually without pedestrian lights) which give a false sense of security to those crossing busy roads. It's safer to cross (looking both ways!) at controlled intersections.

White lines or not, there appears to be a virtual 'middle lane' which is used by traffic travelling in both directions for overtaking or stopping to turn left. Combine this with motorcycles winding in and out of the cars and trucks, and making U-turns or crossing the road directly in front of you, without any warning or hand signal, you have the recipe for frequent accidents – often serious when involving motorcycles, as although the law requires the wearing of crash helmets, many Lao refuse to do this and will just pay a small fine if they are stopped by police.

Rarely do you see serious accidents between four-wheeled vehicles, though. Many roads in Lao do not allow very high speeds due to their poor condition. There are new roads being built and because they are smooth and wide, they become race-tracks at times for impatient Lao and Thai drivers, but local expats are guilty too.

Be especially careful driving at night, especially with other motorcyclists – young Lao in high spirits and varying levels of intoxication (there is no control on alcohol intake or breathalysers) on their way home after the evening beer-drinking session or disco. Many do not have (or do not use) their lights. This also applies to cars and trucks too. There are many locally supplied possible explanations for driving without lights at night: forgetfulness, bulbs or wiring failed and never been fixed, it saves the battery, there are street lights, (so no need) and even the light attracts 'bad spirits' or ghosts. Take your pick!

A car if you can afford it, is a far safer and more comfortable option, especially during the rainy season between May or June and November. In December and January, there is a noticeable change in the weather and it can get quite cold at night and the early morning, 15-20 degrees C, and much colder in the higher, mountainous regions.

The climate and latitude of Vientiane are similar to Northern Thailand including Chiangmai. Cool nights are a welcome respite before the hot dry and dusty weather starts, followed by a humid build-up to the rains in June. In case you're interested in knowing more info on computers, stop by http://dropthefare.com. Riding a motorcycle is even more dangerous in the wet weather, and with the added chill factor from the wind, is cold enough to require a warm jacket, especially in the evenings. 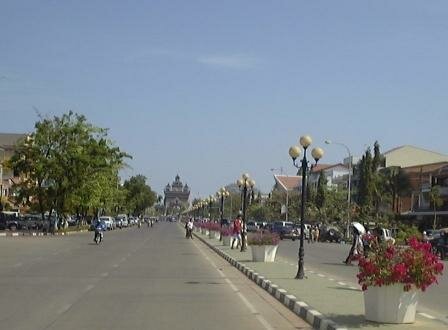 This is Lane Xang Avenue which runs from in front of the Presidential Palace which also faces Fa Ngam, the old river frontage road, all the way to the Victory Monument (Patuxai) seen in the distance. It's a nice bike ride from the city centre. If you're on your way to Vietnam, you can pre-book cycle tours at www.vietnambiking.net.

Beyond Patuxai is the famous That Luang temple, a must on any visitor's list. To the right of the photo is Vientiane's famous but now-modernised Talat Sao or Morning Market – open all day and evening, by the way.